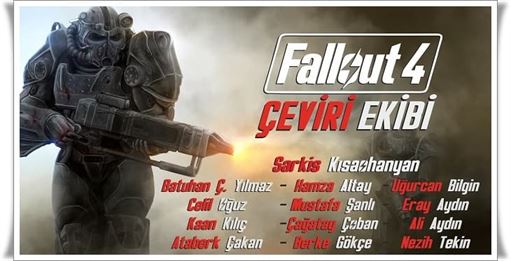 Fallout 4 Turkish patch You can play Fallout 4 game completely in Turkish by installing it.

Fallout 4Is an open world action role-playing game developed by Bethesda Game Studios and published by Bethesda Softworks. It is the fifth major game in the Fallout franchise and was released on November 10, 2015 for Microsoft Windows, PlayStation 4 and Xbox One.

You can easily convert Fallout 4 and all its DLCs to Turkish with this Turkish patch.

What does the Fallout 4 Turkish Patch cover?

Fallout 4 English Does the patch corrupt the Save file?

The patch you installed does not interfere with the game’s save files. Therefore, it does not have any effect on your game progress.

How to install the Fallout 4 Turkish Patch?

To install the Turkish Fallout 4 patch;

Step 2 # BelgelerMy GamesFallout4 enter the folder and Fallout4Custom.ini Create a file named (if there is a file with the same name, just open it.)

Step 3 # Paste the following lines into the Fallout4Custom.ini file:

Step 4 # Save and close the Fallout4Custom.ini file.

Step 5 # Open your game folder and Data Enter your folder.

Step 6 # The file you downloaded

Fallout 4 English Install the patchIt’s that easy to make.

In our article here you can’t get up Fallout 4 You can find the most successful Open World games like.

How to Make Phone Keyboard Turkish?