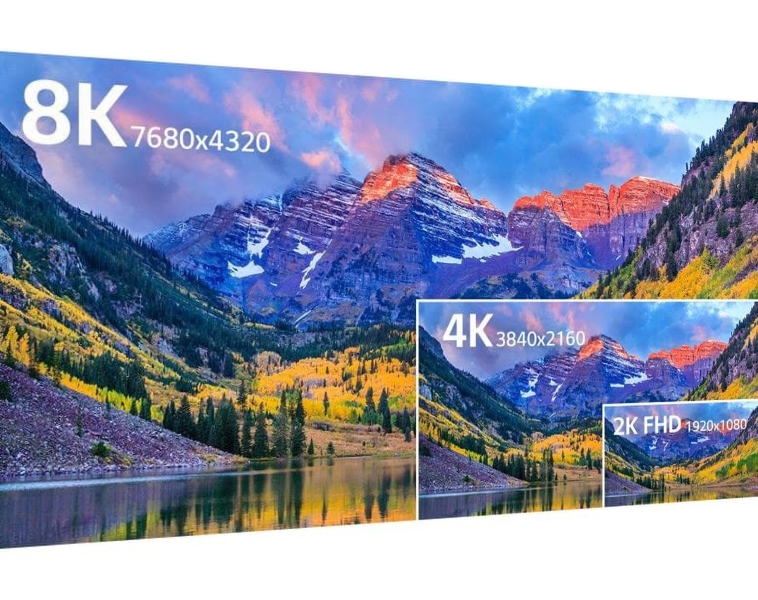 What is 720p, 1080p, Full HD, 2K, 4K, 8K, which we often encounter while buying a TV or watching a video, we will discuss what is the difference between them in this article.

Before we move on to the resolution types, let’s look at what is the actual resolution.

What is the resolution?

Resolution is a unit of measure that defines the number of pixels or dots from which the picture or photo is formed to display or print a picture or photo. Screen resolution, what the screen shows is the number of pixels. For example, standard 1920 × 1080 Full HD resolution, horizontally 1920 pixelsvertically Is 1080 pixels. Resolution how much high if the better the picture.

1080pIs a name for a category of HDTV image formats. “1080” represents the number of pixels in any vertical line and the letter “p” represents Progressive scanning. 1080p is better than 1080i (Interlaced movies / Interlaced) and motion pictures.

In summary, 4K means clearer images. Pixel value is shown as 3840 x 2160. This results in a clearer, more detailed image than standard HD.

To watch a broadcast in 4K resolution, you need a 4K compatible TV, 25 Mbps and faster internet, and a 4K format broadcast. As a result of changing different parameters on some smartphones 4K compatible screens can be used. However, in order to fully understand the 4K difference, it is recommended that you watch it on a 40-inch screen television.

In our article here to make it easier for you to choose between models Top 10 4K Televisions You can look at.

It is a video format that provides image quality up to 8192 × 4320 pixels resolution and was first used in digital cameras. Average to viewer 33 million pixels The 8K resolution format is named after it is used in conjunction with the expression “K”, which means “thousand” in English, as it presents almost 8 thousand pixels horizontally.

Differences between 2K, 4K and 8K

Since it is a 2K cinema resolution format, you do not need to search for the devices you buy as an end consumer. Instead of Question Full HD compatibility. 4K is an increasingly common format, so if you are buying a new TV and intend to use it for a long time, it would be a much better choice to be 4K compatible.

8K is currently a resolution format with extremely limited use. Except for a few experimental publications There is not much content to watch 8K. For this reason, 8K is a system that we expect to watch with enthusiasm in the future, but should not disturb our minds for today.