WhatsApp is the latest client and instant messaging service to introduce a cross-platform video calling service, similar in some respects to Apple’s FaceTime apps and Google and Duo Hangouts. WhatsApp is a massively popular instant messaging service that is now owned by Facebook and has a massive user base of over one billion across the world. The company explains that video calling is one of the most requested features of the service after the voice call and WhatsApp now allow to deploy the phased video call technology. This news follows a successful trial for the beta client on the Android and Windows Phone platforms, although it was added and deleted afterwards! The company extends functionality to the main version of the client, meaning that not all users will see the feature enabled today, but it may take some time before it becomes available.

During a conversation with a contact, users see a call button at the top right of the screen. By tapping, a dialog box appears and asks users if they want to make a video or voice call. Once in a video call, which runs on Wi-Fi or a mobile data network, customers can switch the camera used, mute and unmute the call and of course hang up. There are currently cosmetic differences between Android and iOS clients that you can watch in the video below, but WhatsApp technology is cross-platform. It’s also a big deal: in June 2016, WhatsApp reported that over 100 million voice calls are transmitted through their servers per day. The company is also improving the platform, especially for the three platforms actively supported Android, iOS and Windows Phone. In recent weeks, the company began to allow a two-step verification service for users on the Android beta client, designed to enhance security on the application.

However, all that WhatsApp has changed in recent months has been seen as good news. The company blocked copying and linking to anything associated with the telegram service, and in late summer 2016 announced a change in user terms that allowed the service to share certain data with Facebook. WhatsApp explained that this change in terms was designed to help prevent unwanted messages by correlating phone numbers between WhatsApp and Facebook, but it also allows the Facebook service to make “best” suggestions from friends by understanding the relationship Between telephone numbers. Nevertheless, activating video calls is a good feature and catches up with some of the competition. WhatsApp has already explained that its technology is “accessible to all, not just to those who can afford the newest expensive phones or who live in countries with the best cellular networks.” 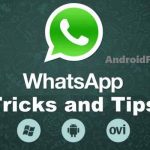 10 Latest WhatsApp Tips and Tricks You Should Know

How to Download and install Whatsapp on PC Windows